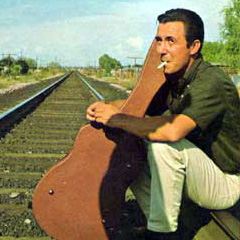 Born on 9 July 1929, in the town of Mannford, Oklahoma, LEE HAZLEWOOD spent his early years moving with his family between there and towns in Arkansas and Texas, where they settled long enough for LEE to attend high school. After a stint at SMU in Dallas, LEE was called into service in Korea.

After his discharge, LEE attended broadcasting school in California, and upon graduation was hired by KCKY in tiny Coolidge, Arizona. It wasn’t long before his eccentric on-air performances, which consisted of conversations between an elaborate dramatis personae with all the voices done by LEE himself, garnered him a local following. One devotee, a teenage guitarist named Duane Eddy, began dropping by to rid the station of its excess country records. LEE befriended Duane and began fleshing out some songs HAZLEWOOD had written, recording them at a local studio. The duo also began driving to Phoenix for country music shows, where they came to know the house band, particularly the young guitarist Al Casey, forging some important alliances for the years to come.

By 1955 LEE had moved to KRUX in Phoenix (where he was the first DJ in town to play Elvis), and started the Viv label as an outlet for his productions. Using a local studio as his home studio, and a phalanx of talented local players including Eddy and Casey, LEE finally struck paydirt in 1956 with his tune “The Fool”, sung by Casey’s high school chum Sanford Clark, birthing the Phoenix music scene in the process. In 1957, LEE gave up DJing for writing and producing full-time when he accepted a job as staff producer with Dot Records, and moved to LA. 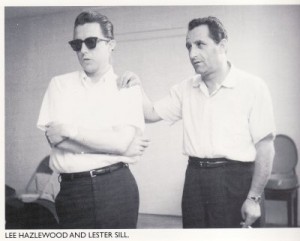 Soon after, HAZLEWOOD hooked up with producer Lester Sill, forming a partnership that would alter the course of American music. Still making regular pilgrimages back to Phoenix, where he continued to explore the sounds he was hearing in the now-familiar context of Ramsey and his erstwhile group of session players, LEE finally broke through when he suggested that Duane play the simple, repetitive melodic riffs they had written on the lower strings of his guitar.  Although the sound had its genesis in LEE’s head, he couldn’t possibly have been prepared for how sublimely it tumbled from Duane’s amplifier, and just how far the two would be able to take it.

Knowing they had the makings of something bigger, HAZLEWOOD and Sill began licensing the Eddy masters to Philadelphia-based Jamie Records in 1958, and enjoyed a huge string of international instrumental hits which helped define what people were just beginning to call “rock and roll”.

The early 60s saw HAZLEWOOD establish a new label, LHI (LEE HAZLEWOOD Industries), and branch out into new territory both as writer/producer and as a performer, with his first solo albums, 1963’s Trouble Is A Lonesome Town and The N.S.V.I.P.s, the following year. In 1967 LHI released the first album by Gram Parsons’ short-lived group, the International Submarine Band.

By the mid-sixties, LEE had achieved some significance with mega-hits and artistic milestones, and had garnered the respect of his peers (not to mention a swimming pool and a nice little stockpile of Chivas Regal). So with the advent of the British Invasion (which was itself profoundly fueled by those pioneering Duane Eddy records), and the sea-change brought upon the Industry by more self-contained artistic projects like the Beatles et al, he had become quite taken with the idea of “retirement” from the music business. That is, until he met Nancy. 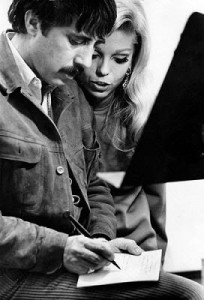 The young daughter of the Amercian icon, Nancy Sinatra was an aspiring diva with a string of disappointments.  Thus she was delivered to HAZLEWOOD. The result, to almost everyone’s satisfaction, was wall to wall hits for about the next 5 years.

Nancy’s voice was a tough and life-wisened instrument, and certainly not lacking in a canny sexuality which, inadvertently or not, anticipated liberated, strong female singing from Nico and Pat Benatar to Kim Gordon and Joan Jett. HAZLEWOOD, naturally, saw these elements for the strengths that they were, and knew exactly how to highlight them sonically. He sculpted, with the help of his now famous session men, a pop brew to bathe tunes which, though not without their “novelty” aspects, were more “novel” in the literary sense: concisely constructed layers of sophisticated artifice operating on several levels of meaning, depending on how deep you were willing to go. 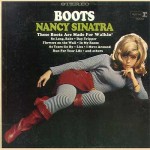 The first string of hits, “These Boots Are Made For Walking”, “Sugar Town”, “How Does That Grab You Darlin’?”, made Nancy Sinatra a worldwide star.  The duet hits that followed include the hardcore rollick of “Jackson”, and the sublime “Some Velvet Morning”, perhaps LEE’s finest moment as a lyricist. It’s important to note that LEE was stalking the very top of the pops with vaguely cloaked S&M and drug references, amid other implications of miscellaneous naughtiness, yet because of the context in which he worked was the epitome of unhip.

LEE’s other Hollywood (mis)adventures included producing Frank and Nancy’s hit duet “Somethin’ Stupid”, writing and writing the Dean Martin hit “Houston”, and the record The Cowboy And The Lady, a hilarious duet LP with the actress and singer Ann-Margaret. He also contributed music to the films Tony Rome and Sweet Ride, and even acted in the latter and in The Moonshine War, alongside Richard Widmark.

Newly minted from this second wave of success, HAZLEWOOD began traveling abroad, landing in Sweden in 1970, where he met director Torbjörn Axelman. The two embarked upon a collaboration which would produce several film and music projects, beginning with Cowboy In Sweden, 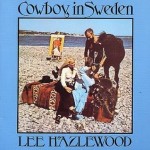 and continuing through Smoke and A House Safe For Tigers. The Swedish Viking label also issued two very rare but strong HAZLEWOOD solo albums. Requiem For An Almost Lady, released in 1971, is an aching meditation on love lost (with some harrowing narration), while 13, from the following year, is a horn-laden departure from the HAZLEWOOD formula that succeeds on the strength of its exuberantly dazed mania.

It’s during this period that HAZLEWOOD emerged as a singer and performer inseparable from his writing and production. After hearing these 70s albums, one gets the feeling that LEE is perhaps the best interpreter of his own ideas, and without a doubt the albums benefit from everything he had developed up to that point: soaring symphonic pop, punctuated by dark, poetic lyrics at once esoteric, witty and honest.

Towards the end of the 70s LEE gradually retired (again) from music, taking up short residences in different locales across the globe and working only sporadically. By the 90s, the first compact disc issues of LEE’s solo work – most of them illegal – began to appear on shady European labels, while his original LHI LPs steadily began fetching higher prices in the collector’s market. All of this, combined with his reclusive lifestyle and the enigmatic nature of his available oeuvre, afforded quite a mythology.

After Rhino Records reissued their hit 60s duets on CD as Fairytales & Fantasies, LEE and Nancy reunited in 1995 for a small-scale world tour to rave reviews. Backstage at the Limelight in NYC, the members of Sonic Youth were able to meet the man, and two years later drummer Steve Shelley managed to track down the elusive HAZLEWOOD and sell him on a reissue project, to be released on his own Smells Like Records label. It was decided that six old titles would be reissued: Trouble Is A Lonesome Town (’63), The N.S.V.I.P.s (’64), The Cowboy And The Lady (’69), Cowboy In Sweden (’70), Requiem For An Almost Lady (’71), and 13 (’72). Additionally, an album of old pop standards titled Farmisht, Flatulence, Origami, ARF!!! and me, recorded between 1996 and 1998, and featuring LEE backed by his old pal Al Casey, became HAZLEWOOD’s first domestic release in over two decades.

The success of the reissues, and the interest generated, especially within the UK, saw LEE return to the live arena as a solo performer for the first time in 25 years, when he headlined London’s Royal Festival Hall as part of Nick Cave’s Meltdown Festival in July 1999. A packed, star studded audience attended a show which saw Lee reunited with many of the musicians with whom he had last played in 1974 in Stockholm (a performance that had been released under the title The Stockholm Kid in Sweden.) Meanwhile, a growing association with City Slang Records developed due to the engagement of the label’s UK manager as publicist. It was maybe inevitable that Lee’s album of previously unreleased tracks, For Every Problem There Is A Solution, would be offered to the label. Simultaneously, City Slang set about compiling a tribute album to honour the man, gathering together many of the artists who have professed admiration for LEE HAZLEWOOD and his work.

Following this burst of activity, apart from another performance at London’s Royal Festival Hall as part of their Heroes & Villains season in 2004 LEE stepped away once again from the limelight. But this time, whilst he may have been taking the opportunity to “swat bugs by the pool” as he notoriously claimed he would be doing when he first retired from the music industry in the mid sixties, he was also been keeping busy on the quiet. His first book, The Pope’s Daughter – a surreal combination of biblical imagery and a semi fictional account of his time with Nancy Sinatra – was published, he worked with Swedish singer Bettan, and he was of course quietly working away on what he declared would be his final studio album, CAKE OR DEATH. Recorded in Stockholm, Berlin, Nashville and Phoenix, the album featured guests from throughout his career, including Duane Eddy, Al Casey, Richard Bennett, Ann Kristin Hedmark, Bela B and his own granddaughter Phaedra, named after the famous character in his classic “Some Velvet Morning”.

Cake or Death was indeed LEE’s final album, as he knew it would be because he had been diagnosed with renal cancer around the time he began work. As stubborn in the face of death as he was in life, however, he carried out an intense promotional campaign and the album was greeted with international acclaim. CAKE OR DEATH refused to compromise HAZLEWOOD’s own musical choices for any reason, and the result was an exceptional record that drew together various strands of his life in a magical, unforgettable way. Naturally, though, he towered at the heart of the entire album, displaying all of the charm and talent that made him one of the most namechecked and influential artists in rock and roll history. It was one hell of a swansong. The man never did things by halves.

LEE HAZLEWOOD died in Henderson, Nevada on August 4th 2007 of complications from renal cancer. He was 78 years old. LEE left behind a wife, Jeane, and three children: Mark, Debbie and Samantha.

His final recording was a spoken word performance recorded three weeks before his death which saw him work with Icelandic admirers amiina, best known as collaborators with Sigur Ros. “Hilli (At The Top Of The World)” was released in December 2007.